Which apparently isn't far off a guitar one, but I wouldn't know not being able to play either.

The day before the pier burned down I was arriving in Leicester to the smell of smoke and thought to myself - there's a fire somewhere here.  It wasn't difficult to spot. 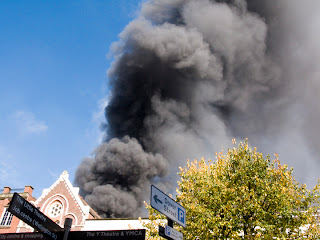 Waking the next morning and seeing a horribly recognisable burning pier on the tv, in the hotel room I'd been consigned to, was soul destroying.  Two fires, two days in a row but the one on tv made me feel really sick.  My pier.  The pier I've gazed at for years, walked on in all weathers when it was open,  drank on, danced on, admired and loved from a distance and up close. 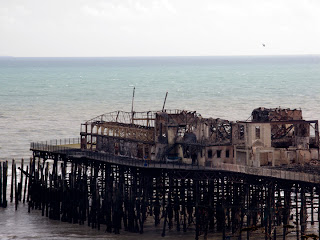 A whole agonizing day later I arrived home and followed the constant stream of people toward the awful sight of our (it's not just mine really) lovely but awfully distressed pier to stand with this continually fluctuating mostly silent crowd of people gazing at the the carcass of all our memories. 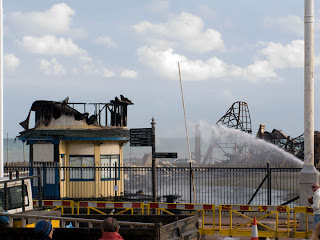 We British, despite our sometime appearances, are made of stern stuff. 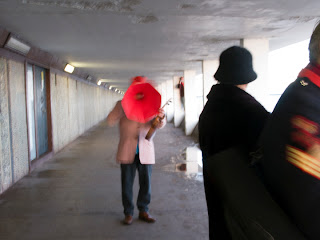 As demonstrated today at 4pm.  David Francis, reclaiming a site of our dubious history from the degradation to which it's been subjected, and to celebrate our pier, began his year long odyssey of a gentle stroll, half a mile each week, down Bottle Alley which stretches toward and meets the pier.   Amounting to a marathon of Ukelele playing.  Singing all the while, accompanied by a band of like-minded Ukelele players, members of the public, a tea trolley and a mountain of cakes. 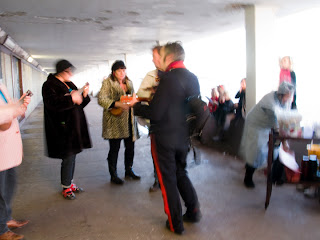 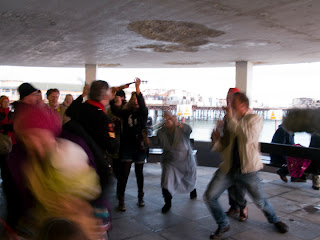 Posted by Lucinda Wells at 9:28 PM

Labels: David Francis, Hastings Pier, HPWRT, Oh I do like to be beside the seaside, Ukelele