It's a prelude and it's begun: I'm making a new piece, a collaboration with my resistant Mum (purist of the piano) and possibly Dad and Adrian. Getting back to my roots in video has taken a while (a number of years) and though I've shot and shot and shot stuff in that intervening period most of it remains on its original source tapes waiting for the time when (and if) it will be harvested, but its certainly not to be just now.

Now, this time, is urging another particular investigation into what fascinates me on many levels. The subject that has always been uppermost in my thinking, that of memory - cultural, societal, local - is requiring a re-visit. Time itself is asserting its presence.

Rea Tajiri wrote about a kind of memory which wants to be explored because it is a whisper of something hidden, unknown yet in some way known, referring to her cultural history and what is omitted. Laurie Anderson wrote in 'Words in Reverse' about the Cree Indians "I am singing the songs of my fathers... I never knew the words of the old songs... I never sang the songs..." I admire too the work of Vera Frenkel who used her imagination to imagine the grandparents she never knew.

My previous video work was about memory, my memory and not my memory. Sometimes it was just a memory, plucked from the space where my mind resides. A construction a la Boltanski or Marker.

Growing up I was surrounded by generations of family (cockneys) who played the piano and sang, it was what was done at that time (if you were lucky). Mum played by ear (no it didn't hurt apparently - yes that joke has been made before) from the age of 5, her hands so small that her fingers couldn't stretch for the melody and she'd use the side of her hand instead. She was much in demand and, to her eternal regret, everyone at that time said she didn't need lessons because she could play any tune requested having heard it only once. I love the stories she recounts of her playing in the dark during the blitz or even when the lights just went out.

The music was inside her head and her hands found the notes. Mum doesn't like the sound of her playing, because she says that when you hear the right cords as they are meant to be played from sheet music it is altogether 'better' but I don't agree, her music is a sound all of its own - of an era and a place, it is joyful and sad, uplifting and poignant. It is full of history and extremely visual. No wonder silent movies always had a pianist. 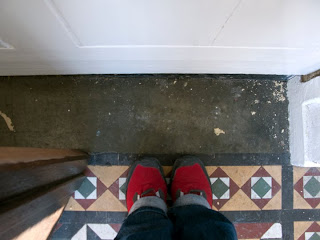 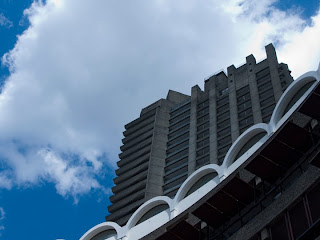 Feel impelled to write something about this event. Wellers Auction House collaborated with The Barbican (and eventually me and Greg) to put on an auction of Lost Luggage as part of The Surreal House. We went along with some trepidation - located in a room some way from the main event - what would it be like, how many would attend? Well. It was awesome. Wellers professionalism shone - they dressed a non-descript room and made it into something quite spectacular - Elvie, Cieran, John and Alastair (not forgetting Andrea, Mark and Chris who couldn't be present). The whole company consists of real visionaries. If I were to work for a business again they would be first on my list. Their ethos of inclusion is truly heartwarming and inspiring. Anyway, having shot the video which will be tightly edited to give a proper sense of the evening I can honestly say the whole affair was truly superb and people totally loved it (being carried away with the energy meant that I forgot to shoot the exterior of the building - hey but that's life on the wing). There was a real excitement and energy to the whole thing. People squealed with delight when opening their cases - it was like a huge manic Christmas. Someone found a man-size Superman outfit - how could Superman lose his clothing...
Posted by Lucinda Wells at 10:47 PM No comments: 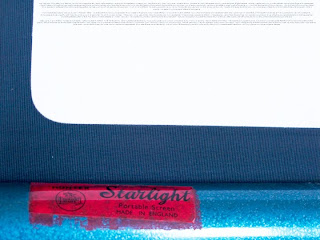 Posted by Lucinda Wells at 11:24 PM No comments: 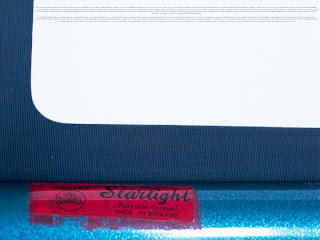 Posted by Lucinda Wells at 11:09 PM No comments: 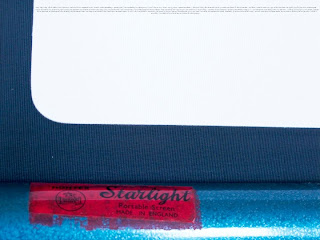 Posted by Lucinda Wells at 10:59 PM No comments:

What's all the flap about?

Just got back from a short and very local break. Seen the most bizarre and often self-centered behaviour while travelling. The lengths some people will go to reach their tiny goal, like getting to the breakfast table before anyone else, even if it means queue jumping a severely disabled person in sweltering heat and requiring them to wait for the lift a whole lot longer... To the man who did that: "Comment avez-vous pu faire cela?" commonly translated as "What's up with you, you selfish git" to put it very mildly. 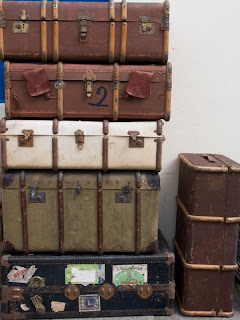 Well, travelling in another age, several generations ago, things were very different obviously - it was a much more serious affair, even sombre some might say. Look at the trunks - heavy, hardy things able to withstand all manner of treatment, but also looking a bit like they would hold treasure. In the 30's Cecil Beaton wrote an article for Vogue: 'Maiden Voyage' in it he describes the arrival at his departure point "All roads to Southampton were busy with a stream of cars speeding to the Queen Mary. On the dock, a large yellow caterpillar, the awning gangplank, led to the new monster ship, where a Hieronymus Bosch inferno of activity, so strangely in contrast with the bucolic scene outside, assumed an almost terrifying unreality."

Thinking of treasure I have a 'handed-down' book (from my much travelled Great Aunt who was, in her time, a bit of a Flapper) "What to say in French" by Y. Fussot. The language both English and French is very beautiful and so much more serious than now (pardon the lack of ecute and grave accents): "Le voyage m'a derange, je me sens deprime. Pouvez-vous me donner un tonique?" "The journey has affected me, and I feel depressed. Can you give me a tonic?" And "What do you ask for the three rooms and the kitchen?" (I could list the entire book it gives me such geeky pleasure every time I refer to it). 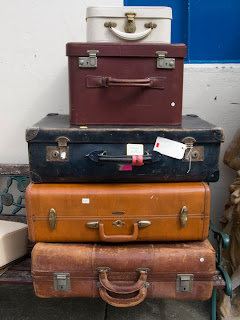 Looking at this later bunch makes me aware that travel had become much less serious in this time, more often, more at the drop of a hat. Look at the cases (no longer trunks) they are smaller, less robust and seem to be smiling. In this period travelling abroad was accessible to a greater number of people and certainly it was quicker, however something quite necessary was lost in the process. Elegance, stature and decorum. Call me a romantic.

I remember as a young adult going to parts of Southern Europe and being beguiled by their differentness and over time seeing these places producing English breakfast, lunch and dinner and so on, how daft is that. Why go abroad if the only thing you will eat is English food? I even saw the archetypal male wearing a knotted hanky on his head and the flag on his arse. That was a long time ago. Maybe it's changed now (I hope so).

However, if our cases are anything to go by (and my recent experience) things have become more downcast, rather ugly and mean. 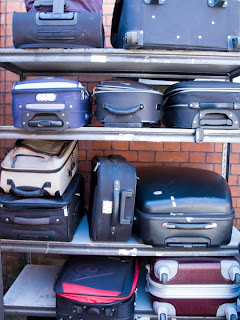 Posted by Lucinda Wells at 12:56 AM No comments: