I've neglected this blog for a while.  It's due to having too much to do.  Too many directions being looked at.  I'm still making work but not sure where it's heading.

My time is taken up with worrying.  A useless exercise.  Although is it?  It's not entirely unproductive and it's certainly time consuming.

I've never been an Activist - always viewed them as very odd.  But now it seems even my ire is irked and so I've joined in.  I don't like it.  First time was in the snow, it was so so cold.  There were only maybe 20 demonstrators.  Almost matched by security and the police.  Some plain clothed who asked us our intentions, some uniformed up with batons and who knows what else.  One nasty one, in different gear, who tried to goad a protestor outside BHS of all places.  A tactic they (the police) used was to not allow the BHS customers to exit the store while we were outside.  Fairly obvious why: make the public cross with us.  And some of them were.  It's a crazy shame.  The police are going to be affected the same as the rest of us.  1100 jobs in Sussex Police are going.  Meanwhile we sang(? kind of) 'No cuts, no cuts, no public sector cuts'.   Which of course applies to the police as well.  Ironic.

Today was another day of participation this time in the rain, I wore a very fetching hat - one with a beak, and we kept it short - only an hour - the police still almost outnumbering us but the men in overcoats weren't in evidence (excuse the pun) and neither was the mean guy.  Maybe they've lost their jobs already and are joining the homeless on the streets because their benefits have been cut (they didn't like the job that was offered to them - BHS cleaner or the next two - runners in Barclays or Lloyds TSB - which means no benefits for 3 years).  They've defaulted on their key-worker mortgages and they can't claim disability living allowance at all.   Their working tax credits are up the spout and their kids have lost the EMA.   Those kids would have liked to go to university but the fees have priced them out.  They will have to live under the poorly pier in Hastings because the homeless funding has been cut, if they need an op on their baton operating elbow they'll be out of luck due to the NHS reforms (even the BMA are revolting at this one - imagine GP's marching - it's getting more like Egypt every day).   Thinking of that likeness leads me onto some more, how our police force kettled, beat and charged (not in the arresting sense) at people with horses.   And they're planning other similar tactics, if you've got the time to watch, by the way it is utterly boring: http://www.policyexchange.org.uk/events/event.cgi?id=285

And so, what about art?  Well that's being cut too.  Our govt doesn't appreciate it.  They don't appreciate anything unless it fits in their pockets or overloads their bank accounts with more dosh.  Then they love it.  Then they support it.   23 millionaires sat last week and deliberated over welfare reform.  Like they give a shit.  I don't think so.  If they did they'd stop getting rid of tax inspectors and go after the damn unpaid taxes of their buddies. 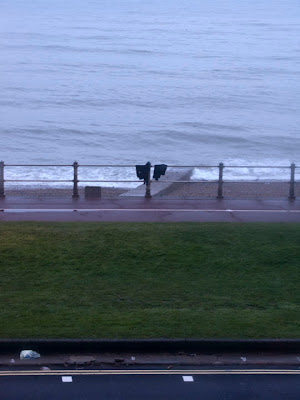 Posted by Lucinda Wells at 10:07 PM No comments: Links to this post