It is cold here, has been for days, weeks, months.  Apart from the odd sunny day that warms my flat and has me feeling oh so happy even if it means sometimes searching for shade.  Today was just such a day.

We English are rather feeble when it comes to the weather - any extremes have us moving sloth-like in all directions adding to the general chaos of our country.   Our infrastructure (personal and societal) struggles to cope if its exceptionally hot or cold (would that be more than a ten degree differential around seventy fahrenheit?) dry or wet.    I have the skin of an Irish girl by descent - it burns in the mildest of sun, turns blue in the slightest chill, white in the snow.   Hence my need to be covered at all times whether I want to be or not.   It seems especially unfair now that age has added deep red (sun or no sun) to my skin's colour range - although thinking about it perhaps not, my body has taken on the colours of my adopted country's flag.

In the process of trying to sort out some of the stuff rescued from a rubbish tip destiny I was delighted to re-discover a bottle given to me by a lovely Italian visitor last year.  Still in its unopened see-through customs packaging (and following the instructions means that it cannot be opened) 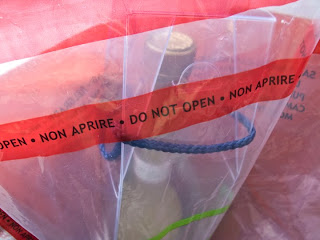 it seemed to have swollen rather.   It suddenly came to me that the swelling must be the Italian air that was originally trapped in the bag when it was sealed - why is it swelling, is it multiplying?  Whatever the reason had it not been growing it quite likely wouldn't have been noticed.   My delight in finding this expanding bag that I can't bring myself to open, containing a rather interesting bottle of Limoncello, was heightened when realising that my flat has contained warm Italian air all through the winter. 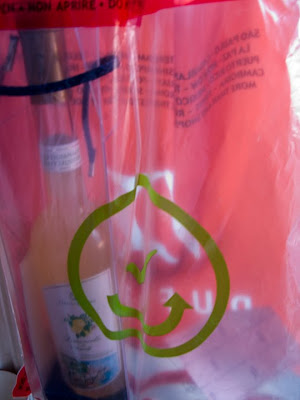 Posted by Lucinda Wells at 6:52 PM Links to this post

Although we live in these times of mass consumption it was still rather frightening to hear that according to a recent poll the number of people who believe global warming is happening and due to our behaviours despite so much visible evidence is shrinking rather than rising.    We are in danger of consuming ourselves.

Is it my sub-conscious working overtime since in the last year my collection of stuff that people would otherwise discard is growing?    Who knows when one might have a need for a lidded plastic bucket or a whatnot.   A 16" piece of 2x4?  A narrow inflexible wicker basket?

It was overwhelming recently on a visit to the tip to find people had dumped, ready for landfill, items that would make the Staffordshire Hoard look piddling.   Keith Arnatt's rubbish dump photo's would be unrecognizable at my local dump full of decent usable furniture.   With not even a meagre attempt at disguise, you know - like a broken back, no drawers or badly soiled seat.

We used to have (and still occasionally do) an unspoken policy here that if you no longer wanted a thing you'd put it on the pavement and within minutes someone would take it.   My ironing board arrived in that way, not that I ever iron anything but someone might want to when they visit.   If on the incredibly rare occasion something is in need of flattening in my home it is neatly folded and sat on.

A younger me never appreciated my Mum's habit of bringing home the most unlikely of finds, ironically thinking they were fit only for a museum (or the rubbish dump).  Taste and appreciation strangely grew with age so I find myself busy collecting some of the things she has collected and a lot more besides because they intrigue me and perhaps to save them from extinction/destruction by the toxic seeping waste they might otherwise be languishing next to and/or contributing to. 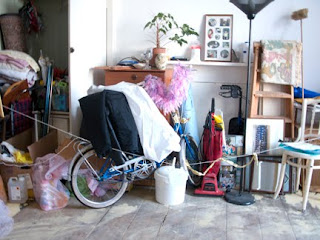 Posted by Lucinda Wells at 9:42 AM Links to this post