This is a crucial moment... 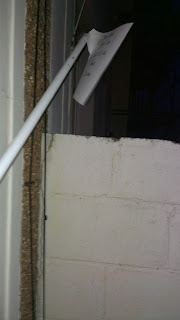 Him:  (He waves his hands in the air) I'm in the middle of eating my dinner.  I'll put it through your door after the ... (what was it he said?), it's a crucial moment.

Me:  No (emphatic) NOW.  What can I do to help (me trying to be forgiving/diplomatic)?  Him:  he points upwards and mouthed something at me.  Me:  It cannot continue.

The first conversation with my neighbour of 5 years.

Today started at 2.38 am.  With an intermittent high pitch beep.  I looked out the window, nothing but black and the beep which seemed to move around the garden space so that I couldn't be sure of its source.

Man-made beeps are not nearly so beautiful as birdsong.  The day before I was woken by birdsong at 4.38. Man is behind the times clearly.  Or aggravatingly before.  The birds today remained silent or went elsewhere - the ugliness of the beep drowning out any possibility of joy.

After 12 hours - what took me so long?  I called the council.  They could hear the beep during the call.  Them:  We don't normally hear it over the phone.  Me:  Can you help?  They came around.  The beep mysteriously stopped on their arrival.  Sod's law isn't it.

What to do?  The council are shut.  Deciding on a plan - that is: to visit each of my neighbours to see if they've heard it and know it's source - I go next door.  There are no door bells.  None.  The wires are all hanging out of the frame in a huge bundle.  But I can hear the beep loudly through the door.   Aha.  I call loudly through the letterbox.  HELLO.  HELLO.  HELLO.  HELL-O.  A light goes on and a door along the corridor opens.  A woman appears:  Yes, Yes, Yes?  The beep is ringing in her ears.  It's a neighbour's beep not hers and she is so tired of the incessant sound.

She lets me in and I climb the stairs to the freeholder.  He doesn't answer my knocks or my hellos through his letterbox.

I go home.  How would you get hold of a neighbour 1 storey up with no doorbell who won't answer his front door?  I'm elevated too.  I get a pole, write a note, attach it then wave it in front of his window while calling out his name very loudly.  KEVIN.  It worked. 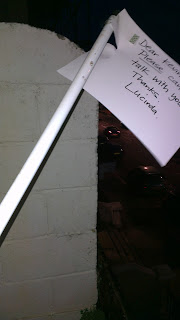 Damn beep is still beeping away.
Posted by Lucinda Wells at 9:22 PM